I eat lunch at a little North African joint called al-Kawthar about twice a week. I like the food, so I had already been eating there a lot, but they play al Jazeera on the TV so since the protests I've been eating there a lot more ot catch the news. It's never very busy (I actually think they're in pretty dire straits) so it's usually just me and the cook sitting in the lobby watching TV while I eat.

Today they were showing a lot of coverage of Libya and also a bit of protests in Aman, Jordan. It got back to Libya and there were split heads and some guy that didn't know what he was doing blowing himself up with a mortar (which I'm surprised we haven't heard more of, it's bound to happen when the national armories get busted wide open by civilians even if the avg Libyan man has 6 mos service under his belt) and lots of 28 Days Later style mobs sprinting through the streets. Then it went over to a still of Gaddafi with some bullet points about him (I don't read or speak Arabic, I'm blissfully unaware) and I said to the cook "you know say what you will but the guy knows how to dress." 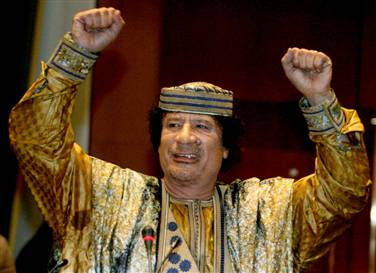 "No! Against him! It's funny you should look it up on theeeee nets."

I wish Admin would turn on the media code

It's Gadaffi's speech from last week remixed remixed and put on a British track.

Personally, I know it's supposed to be funny, and I know that Arabs and people all over are cracking up, but I can't laugh at it. A "shibber" is a hand-length (20 cm), and "zanga" is alley. Gadaffi has asked his supporters to go shibber shibber and zanga zanga--foot by foot and street by street and house by house--killing every protestor, and while the East may be secure, in Gadaffi's zones of control he's doing just that. It's possible that the words have been mixed around such that he's been made to say something else, but--not speaking Arabic--I can't tell.

But, either way, thought I'd share the video with everyone.